Kids go farming? Yes, they spent hours running happily around a farm and harvesting radish on a Sunday morning. Their laughter and excitement spoke volumes of the recent outing at a vegetable farm in Bidor, Perak.

Farmer Edward Chai Kean Mun, who organised the event, said the outing was aimed at inculcating a love for the environment among children.

“It is also a lesson on food production. Many small children from the cities, in particular, only relate food to the supermarket,” he said.

More than 20 children aged between two and seven years took part in the event which started at 8am.

“They were hesitant to step onto the soil initially. But they were all excited when they started pulling out radish from the ground.

“It was a new experience for them – away from the television, computer, smartphone or shopping centre – for almost five hours,” said the 29-year-old Chai, who is a father of two. 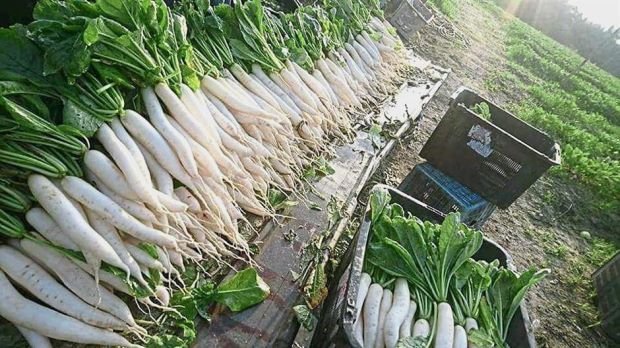 The radish harvested by the children.

A third generation of farmers in Kampung Baru Bidor Stesyen, Chai said he had a liking for farm life since young.

“I liked running around and pushing the wheelbarrow when I was a kid before I was old enough to help my parents out on the farm,” he recalled.

Chai said children, today, would also enjoy the outdoor life when given the opportunity during weekends or holidays. He believes that children and adults alike enjoy outdoor activities such as farm visits.

“I can sense this watching them farming that morning. The event ended at noon when the sun was too hot for them to stay in the fields,” said Chai, adding that it was the first time he had organised such an event.

Bidor is one of the areas in Perak with many vegetable and fruit farms.

Farmers have been turning former tin mining areas in Bidor into rich farm land, producing vegetables and fruits for decades.

Little girl harvested some radish in the farming programme

There is a story behind the beginning of the farms where the pioneers used their bare hands to turn the land into a source of livelihood.

Young farmers like Chai are now the third generation, but some are fourth generation of farmers in their family.

“Life on the farm is hard. While we have gotten used to the hot sun and rain, our worry is the effect of erratic weather conditions on our crops.

“The lack of land to continue farming is another worry plaguing the farmers nowadays,” he said.

Chai said agriculture and farming was a very good sector and the demand for greens was on the rise as people opt for more vegetables and fruits in their diet for healthy eating. He hoped farm visits would also help to inculcate in children, a better liking for vegetables and fruits.

Chai said he would look at organising another farming visit during the harvest season as it would be more fun then.